RSS
← Diamonds in the sky
Day by day →

I know, it’s dramatic and sad. But it’s also true for me.

I still can’t believe that I wrote (and read) a eulogy for my mother.

I still can’t believe that I can’t walk to my mother’s house to see her.

I still can’t believe that I won’t ever see her again. Or hug her. Or hear her laugh. Or see her smile.

I still can’t believe that I can’t pick up the phone to give her news. Or just say hi. Or ask how she is. Or see if she wants company.

I got invited to a mother’s day barbeque by my aunt–the one who tries to help but does a terrible job. She sent an invitation by email saying she was inviting us, and then told us how hard it was when HER mother died. Then when she called me on the phone (she’s calling weekly–prior to this I generally saw her 3-4 times a year and never spoke on the phone) she asked again if I would join them. Both times I said no thank you.

The barbeque was at her daughter’s house (my cousin). My cousin then sent out an email inviting us to the barbeque. After a lot of tears and ranting to Hub, I sent her an email saying thank you for the invitation, but no thank you. Seriously, it made me feel like they weren’t just pushing the knife in, but twisting it around. My mother died five weeks ago, what makes you think I would want to come to your mother’s day barbeque to celebrate how you have a mother and I don’t? And beyond that, what makes you think that asking me not once, not twice, but THREE TIMES helps me? You’re reminding me repeatedly that I have nothing to celebrate…and you do. Good for you, now leave me alone.

I know, I sound nasty. I felt nasty. I wanted to be left alone. I wanted them to stop bringing it up, stop talking about it, stop REMINDING ME. I wanted mother’s day to go by just like any other Sunday. I wanted it to be OVER.

I sent Hub to his mother’s house to be with her. I stayed home. I had hoped to be alone to pass the time as best as possible. Instead I sort of got corralled into spending several hours with my brother and his wife. We’d been talking about this on and off for several days this week. I didn’t particularly want to entertain them, but I was worried that my brother needed to be with me. He’s feeling like he needs to be with family, so I hated to turn him away. Getting the details together for the evening was difficult, and as it turns out we really only had dinner and hung out for a while. Hub came home and joined us for a an hour or so, then they left. I hope it was helpful for my brother to be with me. I don’t know that it was helpful for me. Either way, it passed the time I guess.

I made a gift for my cousin’s baby–due in a few months–including a baby blanket, matching hat, and a doll. Once I made the doll, I realized it was kind of cute, so I made another for my massage therapist, who is also due in a few months. As I was finishing that one, I decided that I was going to try to make some of these dolls to give to our local police or fire department as comfort dolls they could give to children at accidents or fires or in domestic violence situations. 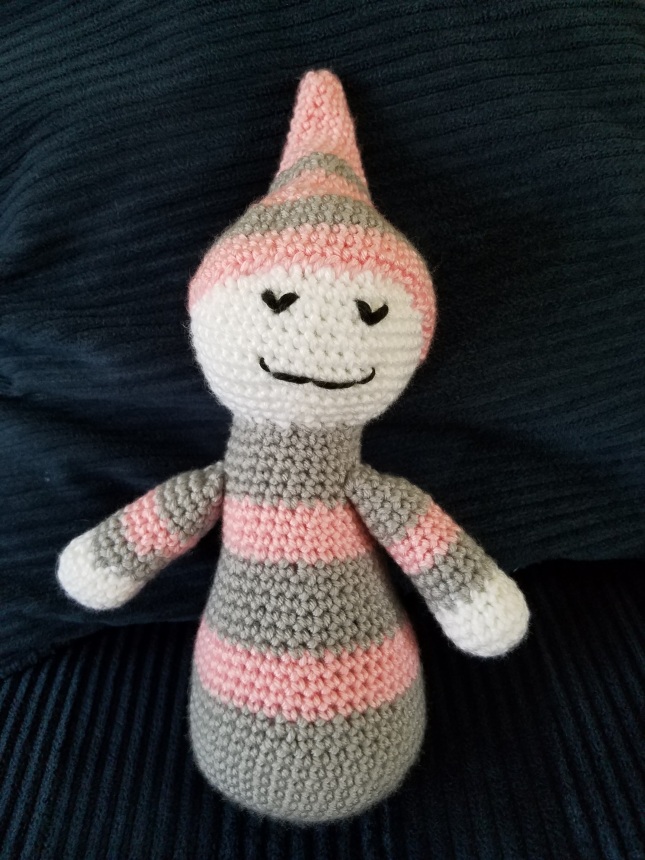 The thing is, I really hated sewing the doll together. The hat, head, body, and arms are made separately, then have to be sewed together. So I went back to the pattern I had for the doll and started trying to rework it so I could make it in one piece, minus the arms. The arms I still have to make separately and sew on, but it’s a lot easier than sewing all of it. I redid the pattern and made another doll, but it turned out too big and the proportion was a little off. I worked on the pattern again and finally came up with a good result in basically one piece.

I’m going to put out a call on facebook, I think, about seeing if anyone else wants to make some of these dolls for local donation, or even if they want to make them for their own community. I’ve never reworked a pattern like this before. I’m not the greatest at this amigurumi stuff, but this is a pretty easy pattern in the end. Sewing the arms on is still a pain, but it’s doable (even though I can’t seem to get them even on both sides!).

The doll has given me something to concentrate on. But oddly enough, I didn’t do any crocheting today. I cleaned up the house a little, did laundry and washed dishes and put dishes away. And I binge watched Grace and Frankie on Netflix. Now I’m trying to wind down the day and get myself together to see T tomorrow.

I’m tired. Weary. Even though I saw my massage therapist on Friday (and also BECAUSE I saw her), my body hurts. My heart hurts. My soul hurts.

Hub told me last night how much he misses my mother. I cried and he apologized for upsetting me. I told him that I wanted him to tell me, that he shouldn’t keep it to himself. He’s a good man. I’m very lucky. He loved my mother like she was his own. She loved him like he was her child. How often does that happen? I have good people in my life–those gone and those still with me. I guess that’s something to celebrate.

← Diamonds in the sky
Day by day →